Photo of small section of the painting The Buffalo Hunt by William R. Leigh

“Art is when you hear a knocking from your soul —
and you answer.” ~Terri Guillemets

That’s so true. Especially when it comes to creating art.

Of course, we’re also given an opportunity to connect with a deep down part of ourselves when we experience the art others have created which reminds of a quote by Rodin: “The main thing is to be moved, to love, to hope, to tremble, to live.” Spending time with Family and with Friends does that to me. WRITING (which is me answering the knocking from my soul) does that to me. ART often does that to me.

Think about how music makes you feel when you merely slow down long enough to truly listen. But playing music, that’s an entirely different level of experience, it’s like taking that deep down you at the center of your being and transforming it into sound. Okay, if it’s me playing the music, it might sound more like a cacophany than a euphany (or any sort of harmony . . .) despite the fact that I might be aiming for the latter.

I’ve always loved music. I played the drums until I was nine. Then we moved and my new school didn’t provide drum kits the way my former school had so I retired young. If I could go back in time and become a skilled musician, I’d have pursued acoustic guitar. I’d have wanted to be able to play like this guy, though my gnarly disjointed post-basketball fingers would make that nearly impossible these days.

If I had to choose between being a writer or engaging in some other form of creative expression, I’m pretty certain I’d stick with writing (unless, of course, I finally found enough pluck to pursue acting).

If, however, I could be like some writers and excel in more than one artistic medium, I think I’d be a visual artist. I’d draw.

As a boy, though, the only visual art I paid any attention to at all were comic books and movies. And, chances are, even if I had been born with a natural ability to draw, there’s no way I’d have been in one spot long enough to sketch anything thanks to that special perpetual motion gene that was part of my childhood DNA.

If I’d been less high-octane, less go-go-go, maybe I’d have gotten mixed up in graffiti like Knee Boots is, leaving my mark on the neighborhood (you know, the cemetery where we played hide and seek, and the back of Jessup’s barn three houses down where we built our go-kart from scraps, or the old alley-fence that ran behind the homes of my friends two blocks away).

As an adult, I’ve had a few moments where I’ve dabbled at drawing, typically from sight (not merely creating from my imagination the way so many artists do). That would be the most amazing thing, I think, to have an idea in my head and be able to sketch it from scratch without any sort of external guidance. 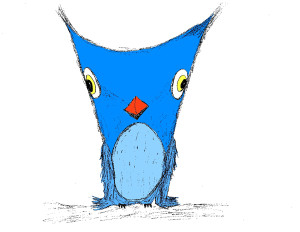 The closest thing I have to evidence of my having any modicum of sketchery (my word for sketching proficiency) was the blue owl I created for a special webpage devoted to visual artists. But I did look at photographs of owls before I tried my hand at sketching one.

There are a few elements of my writing life that do, however, link my rather limited visual art talents with my pursuit of creating literary art:

Maps – these are useful when writing longer works of fiction and trying to keep the location straight in my head. I’ve found that referring to a crude map of the town (as well as crude architectural sketches of some of the buildings, like the abandoned school where Xero meets Knee Boots) has been especially useful.

Visual Character Sketches – in addition to creating some basic maps of towns where characters like Xero and Gabe live, I’ve attempted to create visual character sketches for the entire cast of characters from a YA fantasy novel I hope to write one day. I’ve also started some sketches of Xero (and of Carly, Knee Boots and Webb) and of Gabe (and of Swatch, Mr. Bones, Tyler).

Of course, none of those would qualify as ART (not if judgment is based on technique and on skill, not like these amazing paintings), though perhaps in a basic sense they are if you go by Guillemets’ definition, for they are a response to the knocking from my soul.

Either way, once I get a few together, I’ll post them on here.

As a writer, those visual character sketches have provided me with a different sense for (and perhaps of) my characters, a different understanding of them, a more complete perception, for drawing them has forced me to explore their physical traits as well as ways their personalities might be manifested through their appearance.

One of my strengths as a writer, I believe, is my ability to create characters with whom readers connect emotionally, characters whose inner lives are fully revealed. One of my “weaknesses,” I suppose you could say, is that I focus more on internal landscapes (description of what characters think and feel), rather than on external landscapes (specific details, for example, about setting or about a character’s physical features).

Aside from their usefulness in allowing me to grow as a writer, the visual character sketches are such fun to do (probably because they’re a different way for me to express, and to listen to, myself). I’m hopeful that referring to those sketches as I write will allow me to describe my characters with even more detail so that readers will fully see them, as well as feel them and relate to them and care about them.

At Spalding, one of the precepts repeated every residency was the value of the interrelatedness of the arts and of cross-genre work. Famous scribes even talked to us about how creating in another medium can accentuate your writing in various ways.

Photography has been another art form I’ve immersed myself in at times as a way of exploring the world and as a way of expressing myself without using words.

I’m curious if you work in various artistic media. And, aside from experiencing the pure joy of creating, if you find one form providing any particular benefits to the other.

Here are just three of the writers I admire who also work in other media:

And here are a handful of visual artists I know (one way or another) whose work moves me, inspires me, fills me with a variety of feelings:

I will say this, if I ever get time, I’d like to take a class on sketching.

I’d like to learn some basic techniques for drawing because I’ve found connecting with my characters visually has forced me to explore their physical traits as well as their personalities in different ways. It’s given me a greater understanding of them. I’m hopeful that such a new perspective will allow me to depict them more fully.

After all, according to Edgar Degas, “Art is not what you see, but what you make others see.”

Here are a few places where I’ve experienced some incredible visual ART:

Do you have any favorite writers who are also artists in other media? Any favorite museums or galleries where you’ve encountered art that moved you?

I’d love for you to share some of your favorites here (perhaps you can leave a comment below).

For now, I guess, I’d better get back to working on my visual character sketches. And on finishing the novels themselves. Keep after it!