Batman and Robin by MrSchuReads

I didn’t grow up with some prized comic book collection, like one of the characters on Big Bang Theory might have, but I’ve always been a fan of superheroes. Still am.

After spending a few years without television, I recently caught up on the final season of Smallville. That’s right. I admit it.

And, yes, as a boy, I did imagine myself saving the world each time I leapt off the picnic table in the backyard, trying to fly.

As a boy, my favorite superheroes were Superman and Batman, sure, but I also used to imagine The Thing and The Hulk engaging in epic throw downs.

Maybe it’s the way each superhero has flaws, vulnerabilities, perceived weaknesses which they don’t just manage to overcome, but which, in the end, often turn out to be strengths as well.

Maybe that’s why Ron Koertge’s poem “Sidekicks” speaks to me so strongly, in part because it’s not a poem about superheroes, but about their sidekicks, characters who tend to exist in the background. They don’t usually represent the best of us, not in a sense of possessing superhuman abilities, but they do represent the best of us in the way they selflessly put the needs of others ahead of themselves, the way they exist outside the spotlight and still do what we need them to do. Not for fame, but because it’s the right thing. In some ways, they are misfits, yet misfits who often save the day.
END_OF_DOCUMENT_TOKEN_TO_BE_REPLACED 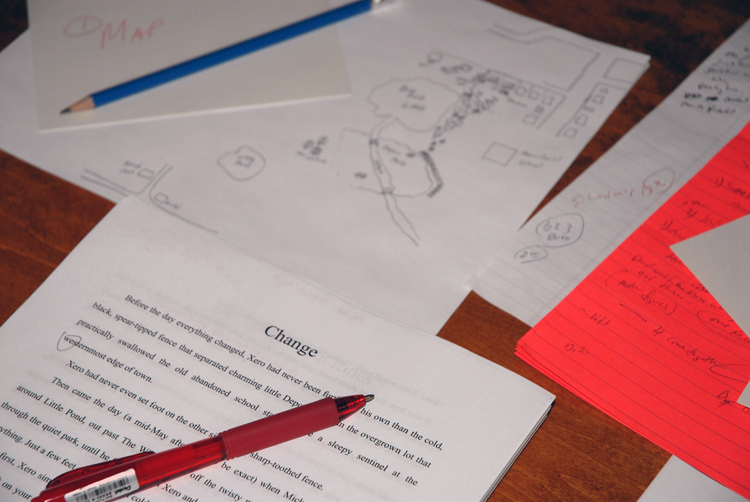 Practice Time At The Page Working on Xero Treu

Dorianne Laux and Kim Addonizio write in the opening pages of their wonderful book, The Poet’s Companion: A Guide to the Pleasures of Writing Poetry, that 90% of what we do as writers is “practice.”

Rather than contradict myself and spend several hours on a new blog post this week, I’m going to dedicate the next few days to practice. After all, I’m attending an important conference next weekend (Rutgers Council on Children’s Literature One-on-One Plus Conference) and my goal is to have my revision of Xero completed by then so I can share it with the editors and agents I meet.

Of course, that means I need to spend all my free time right now reworking the manuscript.

I need to practice!
END_OF_DOCUMENT_TOKEN_TO_BE_REPLACED