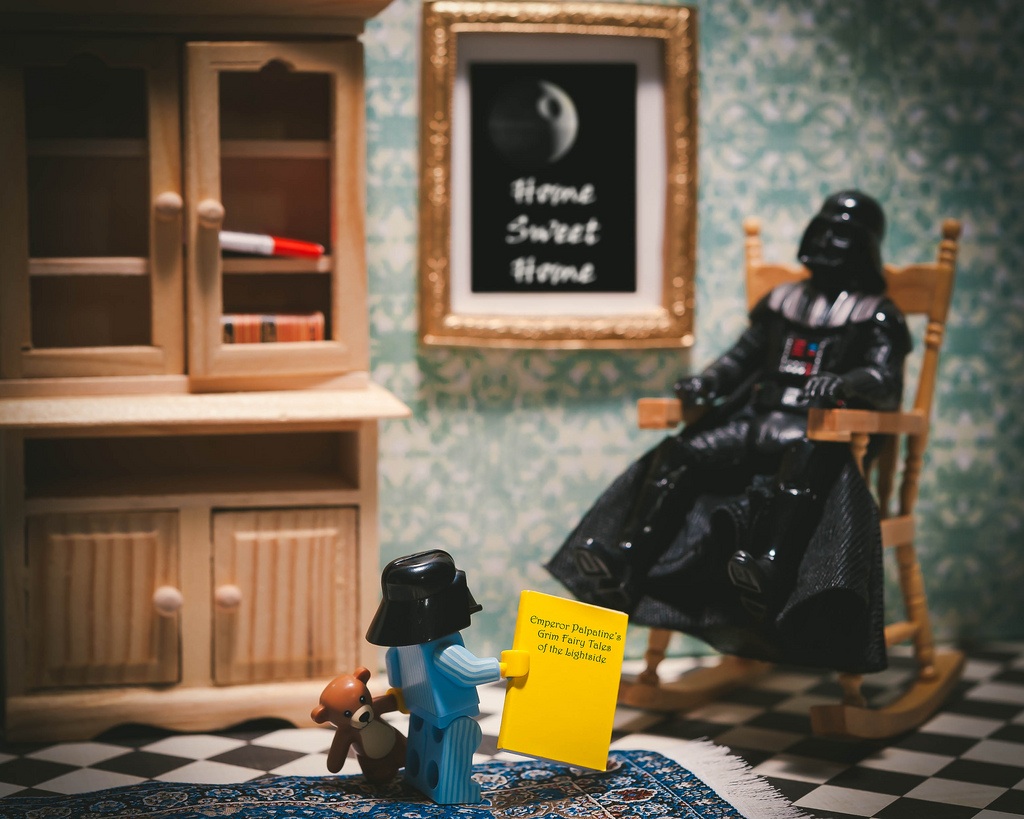 When I was a boy, you would have needed one of those super-powered commercial staple guns to keep me in place for longer than a few moments.

And those rare times when I did pause (like in the photo below of my sister on the stairs) you’d probably think I was up to something. That I was mischievous. I wasn’t (glowing halo appears over head). I prefer the terms curious (you know, about what might happen if say my sister sledded down those bumpy steps) and persuasive (an occasional ability to talk that same sister into trying crazy ideas that popped into my head).

And I blame it all on my super-hyper-can’t-sit-stillness.

Crazy thing is, I would spend hours every day in my room, alone, playing with some toys, sure, but mostly playing with my hands and imagining that they were monsters and heroes and all sorts of things. I remember my parents whispering about my habit of playing without toys more than a few times.

But, see, my hands could become anything. My “action figures” were much more specific – G.I. Joe, and Cornelius from Planet of the Apes, and so on. I spent those hours making sound effects for the adventures and the battles.

I spent hours creating my own stories.

That may seem odd since I didn’t read books. And since I don’t ever remember having bedtime stories read to me (not by my parents or by any of my grandparents). It took me at least two more decades before I could slow down long enough to read stories on my own and I know how much they have impacted my life since then.

I can picture myself as a six-year-old who couldn’t wait each night to climb into bed and to have stories read to me. I have a feeling that would have been very important to me: the special time shared with mom or with dad or with one of my grandmothers, and also the stories themselves, the characters and the absolute wonder of being transported to other worlds.

I imagine if someone snuck into our house and the only thing they snatched was my favorite bedtime story, it would have been worse than if they had stolen my bed or my food. 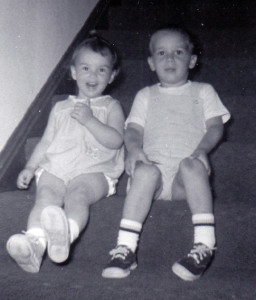 The idea of such an undertaking doesn’t stir up a sense of danger, really, nor feelings of lost safety that come from someone sneaking into your home and taking things. The idea of story books being stolen, of someone only targeting those secret passageways to other worlds and other lives seems so much more intimate. So much more personal.

But the reason behind the act is even more powerful. Why would anyone do such a thing?

Helen and Thomas Docherty explore that question in their wonderful picture book The Snatchabook which I’ll get to shortly.

I mostly write poetry, as well as middle grade and young adult fiction, but over the summer I started envisioning story concepts for a dozen different picture books (characters, obstacles, etc).

Some people might think, well then you’ve got your book, only writing a picture book isn’t as easy as that. As a matter of fact, I recall the time in grad school when everyone in the program was given the assignment of writing a picture book, and the novelists and poets and playwrights, most people I encountered during residency, found it to be the most difficult task. Much more so than they had ever imagined.

So, this summer, I spent some time reading as many picture books as possible. Actually, I have three out from the library right now.

I’ve looked at a few classic stories, but mostly contemporary books, popular books, award-winning books. Books with a fair amount of prose (since I tend to be long-winded) and wonderful wordless books like Journey and Flora and the Flamingo (which I wrote about here). I highly recommend those, by the way.

I haven’t found too many rhyming picture books. In part because publishers have been shying away from them the last several years, or so I’ve been told, since getting the right rhyme and rhythm is quite challenging. Then I came across a book that had an endearing protagonist and, I suppose you’d call the little book thief an antagonist of sorts, but a sweet antagonist. The book – The Snatchabook – had wonderful illustrations and a beautiful story 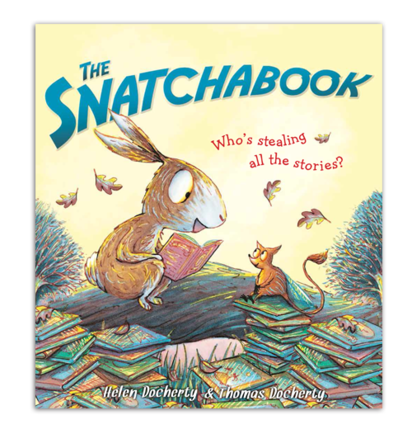 The Snatchabook by Helen and Thomas Docherty

The story takes place in the woodland world of Burrow Down where all the forest creatures and families enjoy their bedtime stories.

But one by one, the books start disappearing.

Turns out there’s one creature in the forest who has no family. No one to read to it. At least not at first.

Since the story is, in some ways, about fitting in and about being part of something (whether it’s a family or a community), I was immediately drawn to the characters. The Snatchabook is not only an adorable little creature that is, it would seem, alone, but it’s also a misfit. It’s unlike every other character in the book, except for one thing at least. It loves stories.

If you have kids or grandchildren or you just love picture books, I’d recommend checking out The Stachabook. I found the concept behind the story very clever and the verse and pictures a lot of fun. For a little information on the team from the UK who created the book, writer Helen Docherty and artist Thomas Docherty, check out some of the interviews I did with them below.

Q&A With Thomas and Helen (from separate interviews):

LAFAYETTE WATTLES: How long have you been interested in writing and in art?

HELEN DOCHERTY: Writing was my first passion as a child (after reading); it made me feel alive and purposeful in a way that nothing else did.

I spent hours at my desk, writing stories and making them into books (complete with my own illustrations). It was a very absorbing – and necessarily solitary – activity, so it’s not surprising that after puberty had kicked in, I spent increasingly less time at my writing desk and more time hanging out with my friends. But the urge to write never completely left me, and when I started writing again – many years later – everything about it felt comfortably familiar.

THOMAS DOCHERTY: When I was about six I was taken to a David Hockney exhibition called ‘Hockney Paints the Stage’ by my Gran. I loved it and that was the first time I remember being aware of art as a thing distinct from just drawing at home and school.

LAFAYETTE: What are you creating for (i.e. what is the deep down force behind your choosing, of all things, to be a writer and an artist, respectively)?

HELEN: On the most personal level, I write because it is a way of entering and creating other worlds without even leaving my room. When you are on an imaginative journey, you can go anywhere you like and make anything happen; you can feel transported to another time and place (which can make it hard to jump straight back into the real world of your everyday life, as you have to when you have a young family). I think writing probably satisfies a need in me to travel, explore, experiment… I also like the way that your own imagination can sometimes take you to surprising places. . . . 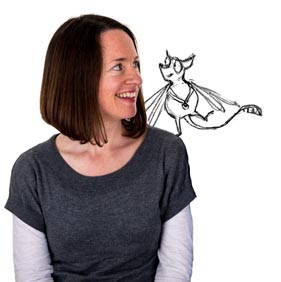 Helen Docherty With The Snatchabook

So, I write for myself – but I also write for my audience; for my own two daughters, and for the children (and parents, teachers and grandparents) who will read my books and, hopefully, take something from them. When I do an author visit to a school and see how the children react to my stories, it makes them come alive for me in a new way. It’s a wonderful feeling to be able to share something that came out of your head with so many people.

Finally, a more prosaic reason, but important nonetheless: I write to make a living; to help pay the bills and keep a roof over our heads. I started writing again when my job (as a part-time university lecturer in Spanish) came under threat due to a department closure, so I had a very strong incentive to make my writing pay. In that sense, it’s just like any other job.

THOMAS: To begin with it was to try to create something new and to share how I saw the world with others. As the years have gone by, those aims have stayed but they have been joined by a need to make a living as well as a desire to help other people create their own work (I do a lot of work with schools and festivals).

LAFAYETTE: What is it about the process that you like most or least?

HELEN: I think I have always thought of my writing as work; a kind of ongoing apprenticeship that started when I was about six, and which I picked up again in later life. The hardest part for me (and this is much harder now than when I was, say, ten years old) is finding the right idea to work into a story. This can be very frustrating, and there are many days when I feel that I’m not getting anywhere. Those are the days when you need a lot of self-motivation (and cups of tea) to keep going. But once I’ve got a good idea to work with, I relish the process of crafting it into a story, however painstaking that process may be. Writing in verse (both The Snatchabook and my next book, Abracazebra, are rhyming stories) is quite a different challenge from writing in prose, but immensely satisfying when you find the right rhyme. 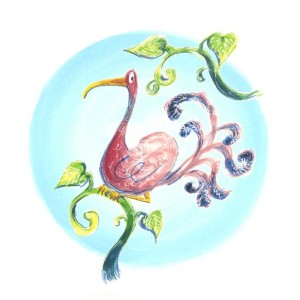 THOMAS: I love the planning stage, drawing roughs and doing colour tests, when everything still seems possible and I’m not tied down to a finished image. The part I find hardest is making those final decisions, choosing just one colour or line, that’s when I feel least confident and most indecisive.

LAFAYETTE: What is one thing about art you think people might not understand?

THOMAS I think some people find it hard to understand that art can be hard work because they don’t take it very seriously or maybe just take it for granted or assume it must just be fun. Of course it can be, but there is another side to it that can be frustrating and challenging.

LAFAYETTE: Do your art subjects, overall, reflect your personality in some way?

THOMAS:   Yes. I think you almost always come back to the things you like or had an impact on you when you were growing up.

Sometimes, as an illustrator you are asked to work on things that are outside your experience or interests. This can be often be really interesting but if you are not able to find something in the subject that connects with you, the project can become difficult with unsatisfactory results.

Keep an eye out for the next Helen and Thomas Docherty collaboration, Abracazebra, which will be out in the UK in 2015. And visit Helen’s and Thomas’s websites to learn more about them and about their other work.

For a special behind the scenes look at Thomas Docherty’s Illustrating The Snatchabook, visit this site.