“Time is the coin of your life. It is the only coin you have, and only you can determine
how it will be spent. Be careful lest you let other people spend it for you.” – Carl Sandburg

Believe it or not, I barely had enough time to get this post done. And I’ve been working on it for the past three weeks. But I digress. Sort of.

This is a post about chasing dreams. And about time. And about multi-tasking, in a manner of speaking.

I have long accepted the fact that I have a jiffy-pop brain. My thoughts, though linear at times, tend to pop all over the place about seemingly unrelated or random things. Of course, they pop even more frequently about related things – as in things related to my dream of being a full-time professional writer.

As a result, I have several projects going on all the time. Like this very moment, I’ve got a new Reading Series that launches tomorrow at Ravines Wine Cellars, I leave a week from today for Historic New Harmony to co-host a week-long retreat for writers and other creatives (which means I’m still fine tuning workshop ideas and materials). I’m tutoring my niece for all sorts of 10th Grade Regents Examination Craziness, and working my job. Oh, and trying to keep up with this blog and work on new poetry for the YA novel-in-verse, and there’s the very cool collaboration project I’m working on with the artist who helped create this website and . . .

You could call it multitasking, I suppose, though recent studies suggest that term to be a misnomer – as we are really only able to truly focus on one thing at a time, we’re just able to move from one thing to the next thing and back again almost instantaneously.

The human brain is wired in such a way that allows for that ultra-fast processing (a.k.a. what we call multitasking), but because we have that capability we often fall into the habit of non-stop multitasking. And that can be a problem (on so many levels).

Our brains are designed to scan, to search for potential dangers, to be on alert. It’s a survival mechanism.

I could go into the potential physiological problems that arise from the growing trend to have our brains in the fight-or-flight state most of the time, but I’ll leave that to those more qualified. Instead, I’ll allude to the quality of work such rapid-fire focus produces. Or, in particular, working on multiple projects simultaneously has worked for me.

One of the interesting paradoxes of creativity is that we need to focus on the task at hand in order to turn inward and to mine the gems deep inside. We also need to be open to whatever comes our way, to be receptive.

Sometimes we force ourselves to focus so hard on what we believe we’re supposed to be focused on that we actually prevent ourselves from receiving creative impulses and ideas rushing toward us. Of course, sometimes we get so caught up in starting every idea that comes our way, that we never complete anything.

Such is the juggling act of the writer, the artist, the creative.

One thing I’ve done that has helped me (I think) is breaking down my many tasks into groups. It sounds rather simple, I suppose. But simple is often best. I have to remind myself of that frequently. Once you put the grouping into practice, it gets easier – though it’s never really easy, as there are infinite external and internal distractions vying for your attention, your creative energy, your time. 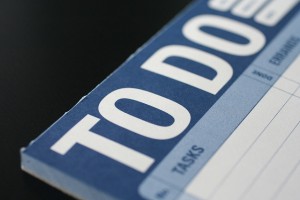 So I break my tasks into groups like WRITING and WRITERLY STUFF (which I break down even further) and THE REST OF MY LIFE STUFF (including fun with family and friends).

Here’s what I mean:

WRITING – as in, you know, the act of actual writing.

This is the most important part of my dream.

When I am working on a book, like I was on The Short Bus, I am focusing 100% of my attention on that project during my writing time. But I am also open to any new ideas that come to me.

Yoga practitioners know their thoughts will wander. Again, that’s a design feature of the human brain. The key is having the ability to redirect those thoughts back to the breath, back to the moment, back to your intention. The same is true when writing. In the middle of a scene featuring Xero and Webb and old Mrs. Shankman, an idea sparks in my head about something else. Maybe even about some other new story. I don’t fight it. I acknowledge that thought, jot it down, then return to the scene at hand. When I’m done writing for the day, or when I take a break, I make a more complete note of the new idea.

When you’re in a creative state, the mind and the body and the emotions are all working together. That is prime time for some wonderful new ideas.

It’s important to be open to them. Otherwise you might miss the one thing that trumps all the rest.

Have you ever gone on vacation to a destination you’d planned for and then discovered something that stood out that you hadn’t even given much thought to before starting your journey? I have. Dozens of times.

When new ideas start popping. Write them down. Keep them safe. Then let go. Return to your original intention.

OTHER WRITERLY STUFF – actions related to writing . . . I have broken things like promotion (which, it seems, many creatives resist) down into three basic acts that I can stomach much more agreeably:

After completing the manuscript for The Short Bus, I returned to writing poetry and over the first two weeks of May I managed to scribe about fifteen new poems. Although I’ve had to curtail my writing time the past few days, I still have a few new poems in the works. But over the next two weeks in particular I’ll be working almost exclusively in preparation for a few big events: 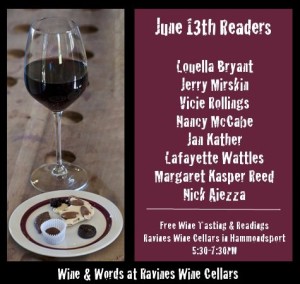 West of the Moon Writer’s Retreat in Historic New Harmony
My good friend and colleague Terry Price and I will be hosting
the 3rd Annual Retreat for Creatives in New Harmony, Indiana from June 22-27

I get to read my own work as part of a special event with writers from the Spalding MFA program reading at The Speed Museum.

Social Media
I spend some time each day on Facebook and on Twitter. I’m mostly in and out. I write whatever my post will be on a pages document, copy it an paste it on Facebook. I’m still just starting to get the hang of Twitter, but it’s actually becoming fun.  of like a

Other Projects – these are various creative projects that keep me in touch with my creative side, while also allowing me to give back, to experiment, to try new things, to explore other interests.

Other Cool Birds – this is one of my favorite projects ever!

If I could paint or draw with the skill of these artists, I’d be so beyond thrilled. You really need to check it out. The project combines my love of visual art and images and imagination with my love of writing, as I invite artists I admire and write a blurb about them. It requires a little time to research and to write, but it’s also allowed me to interact with some remarkable artists and with people connected to my dream of being a full-time author (people like Coretta Scott King award winner Frank Morrison, who will be the July Featured Artist, and Helen & Thomas Docherty who created The Snatchabook). Plus there’s a special section devoted to my favorite novel of all time, To Kill a Mockingbird.

Collaboration (project with the talented artist who helped me create this website – this is a top-secret project requiring Level Nine clearance . . . which you don’t have just yet).

THE REST OF MY LIFE STUFF

Work – jobs are important and they ten to take up a big chunk of our time, but I try to work on my writing and the other stuff above before heading off to work. Some days that’s easier to o than others. Being flexible and forgiving helps. If, like this week for example, I don’t have large blocks of time for writing, I try to sneak it in between the other things.
Fitness – staying healthy and fit is important to me. It helps with the writing if my knees aren’t screaming at me and for whatever reason running helps my knees (when I was younger it was the opposite).
Fun – spending time with my family and with my friends is very important to me and I make sure I allow myself time to do this. Some weeks this is a challenge, but I make a point to get together with someone every couple weeks. I have some amazing friends and the best family and the best part is that we don’t need elaborate plans to have fun. Just being in proximity to them revives my spirit and my energy.

“Too many of us are not living our dreams because we are living our fears.” – Les Brown

You don’t have to plan every second of your day, to make the most of your time and keep chasing your dream, but having some sort of structure, some sort of flexible plan helps me. And working on several projects at once allows me to focus on various parts of my dream each day.

Keep after it, y’all. Keep chasing your dreams!

“caffeinating, calculating, computerating” photo by ryantron and “To Do’s” by Courtney Dirks
are used as per Creative Commons License on Flickr.