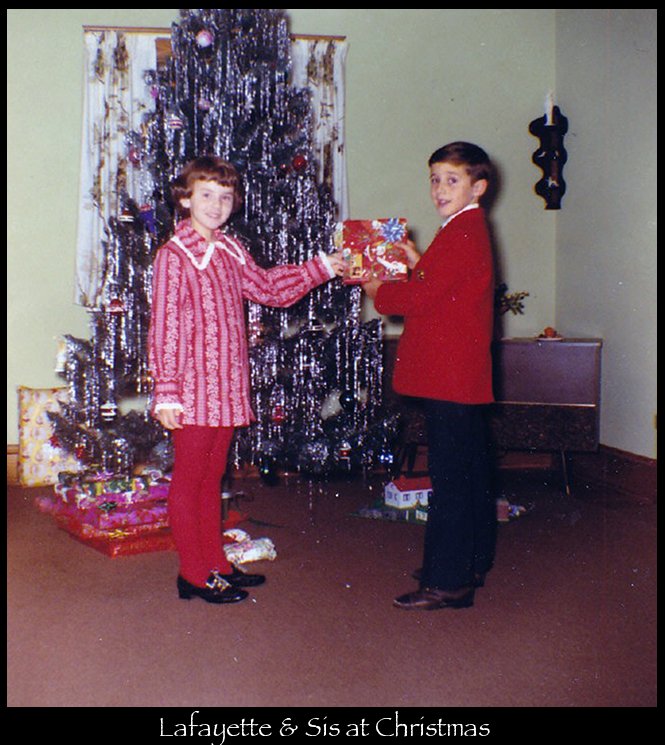 Today I’m going to write briefly about Christmas and the Gift of Generosity.

I don’t remember a lot about my childhood. I’m not sure why, I just don’t. Even less from my teen years. Perhaps, I’ve just tucked it all away somewhere. The events I recall most from my early years tend to be embarrassing and funny, though a few were frightening. I alluded to several of those last week in the list that appears at the end of this post and I’ll get to those incidents after the holidays.

Two things I do remember from my childhood, though, are how my family showed me the importance of GENEROSITY in the things they did, and CHRISTMAS.

My gram and gramps had Foster Kids when I was growing up. I don’t remember all of their names. There were quite a few kids who came into our lives over the years. I do remember a few specifically (Rusty & Sheldon, Baby Karen, Little Jimmy), though, as being important members of our family. I don’t ever remember feeling like they were strangers. They just always felt like part of the family. Even today, when I think back, they were more cousins than anything else.

You could say, my grandparents helped give those kids something they had been missing from their lives. But the kids did the same for us. Of course, I didn’t realize that until I was an adult.

Every Christmas, those same grandparents would have a special holiday party for the grandkids (we had a gaggle at times) with hot chocolate and cookies and we’d each bring a gift or two to wrap.

Then my grandfather would take the gifts to less fortunate families in the community. We knew the ages and the genders of the kids so we could pick out gifts we thought they’d enjoy, but we didn’t know faces, we didn’t know exactly who was going to get the presents. I think that was part of the lesson I never realized back then – it didn’t really matter who they were, but that they were.

I used to wonder, even back then, what it was like being those other kids.

I remember going with my gramps to deliver the packages. I remember how humble, yet grateful the parents always seemed when they took the bags of wrapped presents from us and how my gramps always spoke softly and nodded and smiled.

He was a man of few words, at least around me, but his smile and his little chuckle I’ll always remember. You could tell how much he loved making other people laugh and smile and feel good inside. I think, without ever being aware of it, I was learning those very things every time I was around him. They’re a big part of who I am today! 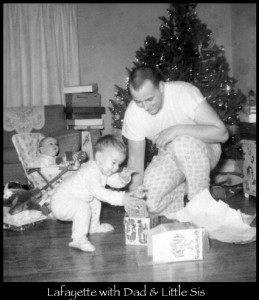 Of course, my parents showed me the importance of Generosity all the time.

The way my dad volunteered to help pattern the teenager I didn’t know, the one who has stayed with me all these years (and has influenced one of my poems and also one of my Middle Grade novels).

That’s what Generosity means to me, at least, and it’s also what Christmas means.

Here’s what I remember.

Grandpa Lucky used a jackknife to open his presents and it took him about fourteen minutes to open the darn jackknife first (I mean, each of us kids was ready to explode).

Then he moved so slowly slicing through those tiny pieces of tape you had to keep watch just to make sure he wasn’t stuck. And I’m talking about him when he was a younger old man, not the one in his eighties, but from the beginning. From as far back as I can remember.

He loved to savor the moment.

Me, I feel self-conscious, awkward opening a gift, any gift, that I sort of try to hide the opening. But that’s me now and that’s another story. 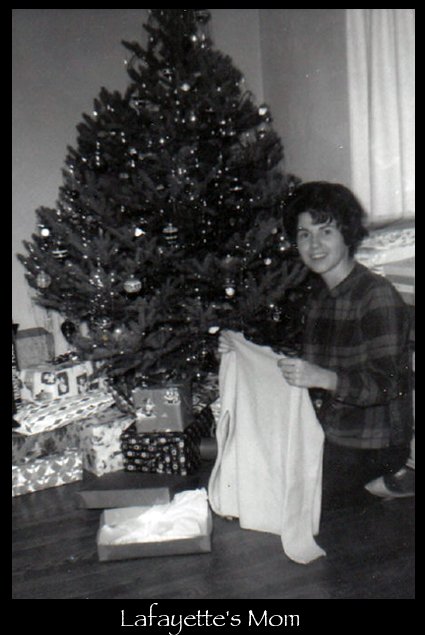 My sister was like the Tasmanian Devil of unwrapping.

She would tear through her gifts in such a frenzy (you’d have thought the zombies from World War Z were coming through the door and she was trying to get through all her gifts before they reached the tree). She was so swift, in fact, that she would then start helping me unwrap my gifts.

Now, I’m not talking about a hundred gifts the way you see under some trees, but I’m not talking two gifts either. For all the money my parents saved, for all the ways they were conscientious with their money, my sister and I always had more gifts than we ever wanted (and certainly more than we needed).

And my sister always helped me discover exactly what they were in record time.

Look, I get it. The rotund, jiggly, jolly old soul in the red outfit isn’t an actual person.

When we’re little, we’re too literal to learn about Christmas without having someone who embodies the basic concepts. It’s a cognitive thing.

Unfortunately, consumerism has sort of helped shape exactly how that embodiment is often perceived. But at his basic level, Santa is a metaphor for generosity. He is the spirit of Christmas made flesh. And he’s important, I think, because he’s not the religious representation.

Don’t get me wrong, I love and believe in the religious aspect of Christmas, the actual origin of the holiday. But Santa gives us a somewhat contemporary figure. One who has been around a while, sure, but who tends to be perceived/represented as timeless.

He’s not a religious symbol, but in some ways he’s the emotional representation, and perhaps even a representation of childhood imagination.

He’s magical, not because he’s imbued with Godlike powers, but because of his passion for giving, for spreading joy and good will. He’s not here to give Hope as much as he is to show us the way of Generosity. He’s the personification of one aspect of the religious personification.

And, if we remove the commercial element, the giving of material gifts, he embodies the spirit of empathy, of consideration, of kindness, and love. And those values are important. They are, at times, lost beneath the mountains of things people want and ask for and feel obligated to buy each other. But that brings us back to family.

If our families show us these same values, if they instill them in us, the gift-wrapped packages are just tangible reminders. They aren’t the only thing that matters. They matter because of what they represent.

As does Santa Claus. Who does exist. In our hearts, even more than in hour minds.

And he exists in our actions.  If we let him. If we at least, every now and then, put other people first.

We don’t have to be altruistic every moment of the day, but from time to time, if we can consider what it’s like to live like that person. And to extend to them kindness, compassion, generosity.

Slowing down long enough to consider others is a gift (though it might really just be the way it should be, it’s not always the way it is), actually, trying to see someone for who he/she is instead of how he/she fits or doesn’t fit into our lives.

My grandparents and my parents taught me these things. At Christmas, yes, but also during the rest of the year. And that might be the best gift they ever gave me.

The concept of Generosity that my family demonstrated (and continues to demonstrate) is another reason why writing is important to me. Because it’s one way I can not only stop and see other people and other lives, but acknowledge them, even honor them. That is my hope at least.

And to provide them, if possible, with the same feelings inside that Eudora Welty had about stories (which she expresses in the following quote):

“It had been startling and disappointing to me to find out that story books had been written by people, that books were not natural wonders, coming up of themselves like grass. Yet regardless of where they come from, I cannot remember a time when I was not in love with them — with the books themselves, cover and binding and the paper they were printed on, with their smell and their weight and with their possession in my arms, captured and carried off to myself. . . .”

After the holidays I’ll finish up revealing a few of my youthful activities (aka blunders) as well as a few incidents that impacted my entire family from the list below:

Whatever you celebrate, I hope you take a little time to celebrate something (including the spirit of Generosity), if only the fact that you are here. That we are here!   🙂