“Mothers are fonder than fathers of their children  because they are more certain they are their own.” – Aristotle

Though, doubtless, there have been many moments when my mother has scratched her head and wondered that very thing.

Last week I wrote about being different. Well, there’s no way I’d have survived being different if not for my mother, not to mention the fact that she’s been one of the people encouraging me to be different my entire life.

I never told my parents (or anyone at all) about the things I endured during Middle School. But hey, that’s the beauty of being a writer. I get the chance to do that every day now with the hope of making similar odysseys a bit easier for misfits today who might find themselves on the periphery, belonging to some degree perhaps in every group, but not quite truly belonging to any.

This post is a rather informal ode to my mom.

She has an expansive heart. She’s extremely loving, caring, conscientious, empathetic person. Someone who tends to put others first. Though that can get in the way of her own happiness sometimes, it’s just who she is. It’s not intended as some noble thing. It’s not something for which applause or praise are expected.

Truth is – if she didn’t think about how this or that might impact everyone else, she simply wouldn’t be being herself.

a : a female who gives up her body, her heart, her time, okay, her life, to bear us for the long haul;

b (1) : see selfless; see love; see someone who had no idea what she was getting herself into, er, um, I mean see resilience; see kindness . . .

My mother (or mom, as I tend to call her,) and I are very close.

Ever since I was a small boy, we’ve had a special bond. Of course, that may have been magnified by all the times I ended up on oxygen tents growing up, all the times she and my dad would leave the hospital late at night, my screams chasing them down the hall, into the elevator, all the way home.

“There was never a child so lovely
but his mother  was glad to get him to sleep.” – Ralph Waldo Emerson

Although I’ve been told I was a lovely child (not in appearance, but demeanor), there were countless times I inspired my mother to get me to sleep, even as an adult.

Like the time she saved up for years, going without, so that she could buy new carpeting for the house.

It was summer and I was a bubble boy unleashed upon the tar-patched world.

Whenever I played in the backyard or under the lilac bush or up in the trees, I usually ended up admitted to the hospital. Hence my playing in the street (football, baseball, tag, anything that involved running, go-kart racing, and so on)!

A few days after the new beige carpeting arrived, my brain did it’s got a new idea thing and I went in search of my mother. I strolled through the kitchen calling for her. Through the dining room. Through the living room.

When she showed up at the top of the stairs, she looked down and her mouth came unhinged. I looked behind me (which is where she was looking) and saw the pitter-pat tar tracks of small feet.

I was out the back door and to the end of the driveway in about three-point-two seconds.

Trouble is, my mom was down those stairs, out the backdoor, and all the way to the end of the driveway in those same precious seconds. I was about to stop when I noticed her outstretched hand only centimeters from grabbing hold . . . of me!

Then there was the time, when I was fourteen (I was about 5’9”, weighed a whopping 100 pounds on a heavy day), and my cousin, who was a senior and a black belt in karate, showed me some awesome moves (kicks, strikes, holds, throws).

I was so excited that when I got home I found my mom in the kitchen. Hey, my dream of being a ninja started long before that.

“Wanna see a new jump kick I just learned?” I asked, as adorably as possible.

Mom was doing dishes and she said, sure, and she slung the towel over her shoulder and dried her hands. I assured her that she had nothing to worry about since it was a jump kick and I’d be several feet away.

Until that moment, I don’t think she’d even considered there might be a reason to worry.

Yeah, about that. You could say I experienced a slight miscalculation of proximity. In actuality, what happened is this – I jumped, but I was so excited about the kick and about my new-found ninja-like abilities, that I might have been a bit too jacked up on adrenaline.

I jumped (a bit too exuberantly) forward instead of straight up and sent my (did I mention that my mom is verrrrry petite?!?) sweet, trusting, ultra-tiny mother flying back against the sink where she slid down the cabinets to the floor.

Yep. I’m still apologizing for that. 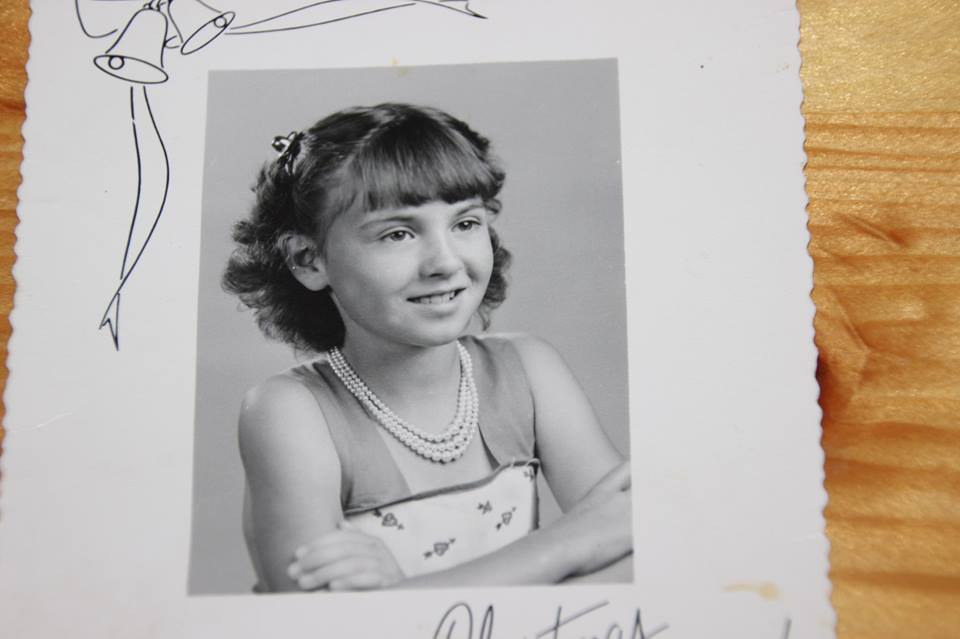 Lafayette’s Mom (Whose Nickname as a Girl Was “Sparkle Plenty”)

My mom is one of my biggest supporters (she and my dad, my sister, and my closest friends). That’s why I wrote the poem below for her. It’s still raw and needs work, but I share it here because I want to share the way I feel about my mother.

She’s one of the most giving, altruistic people I’ve ever known.

“A mother is a person who, seeing there are only four pieces of pie
for five people,  promptly announces she never did care for pie. – Tenneva Jordan

My mom would do that. Even if it was strawberry rhubarb, her absolute favorite pie.

Regardless of what the thing is, my mother is the sort of person who would sacrifice her own piece of that thing so that others could enjoy it.

And I admire her for that!

He didn’t know it at the time, but Ambrose Bierce was describing my mother when he wrote about a sweater:

“Sweater, n.: garment worn by child when its mother is feeling chilly.”

“Dear Mom” is a new Factional Poem written especially for my mother. Inspired by fact, but woven together with fiction.

There was no duct tape, for example, and my sister probably never surrounded me with knives to keep me locked away. Probably. I used to hang out (as in HIDE) on the school rooftop during recess, not on the garage, and I never ended up in the river (on my go-kart), but I did build a go-kart out of lawnmower parts and other treasures adults left sitting idle in garages, and we did have a full attic and I did go by the old house recently, and . . .

The one thing holding the whole poem together, the one indelible unifying thread is, of course, MY MOM!

Here are two more quotes about mothers that I thought seemed apt:

“The most remarkable thing about my mother is that for thirty years she served the family nothing but leftovers. The original meal has never been found.” – Calvin Trillin

“The mother’s heart is the child’s schoolroom.” – Henry Ward Beecher

Mother’s can make the world a much harder place to live in. We see witness of that often in the news. I witnessed it too many times with children I’ve known.

But mothers can also make the world more bearable. More spectacular. And that’s the sort of mother I have.

Remember the night you found me
locked in the attic, surrounded
by every knife we owned,
wrapped in all that tin foil,
and you thought I was just being me,
was trying to reach out,
to make contact with some other world?

You didn’t see the duct tape on my wrists,
the bicycle lock that had me
anchored to the wooden beam,
didn’t hear your sweet baby girl
snickering in the dark,
didn’t notice those blades
were all turned in, so I forgave you.

Remember the afternoon the neighbors called,
not about the broken fence or the cracked basement
window or the missing cat (which was found,
after all, in the garbage can on the curb),
but about the time they did their daily snoop
and saw me on the roof of our garage?

They called five-o first, so half the neighborhood
showed up with the flashing lights,
and that one young cop tried to talk me down
as if I was going to jump those eight, long feet.

I drove by the old place just last week
and the whole thing is leaning now.
No one was home, so I stood in the driveway
not even needing my toes
to grab hold of those crumbly old shingles
covered with moss and soot.

You never understood why I would play up there,
that it was the one place she couldn’t reach.

Remember the day, on your way
home from work, you turned
the corner at the bottom of our hill
as I went whizzing by, and on
through the grass at the end of the road,
and over the tall bank they’d built
to keep the river out,
my go-kart suddenly a raft, and I,
no modern day Huck Finn,
floundered like a prepubescent lunatic,
swept furiously downstream
in the river Mark Twain had looked on in his day?

We never did recover the lawnmower
wheels and I still feel guilt for that,
but the good news was I didn’t give in
and let her be the first to ride,
or we might have lost her too,
the way we did our lives after the storm hit
and the flood took over city hall,
and you and dad spent weeks
discovering that faraway mountain top
where we moved, and nothing
was ever the same, except her.

You must have known back then
how she’d teach me day by day by day
to go further, to search for a way out,
to never give up, to never stop
trying to get beyond wherever I was. 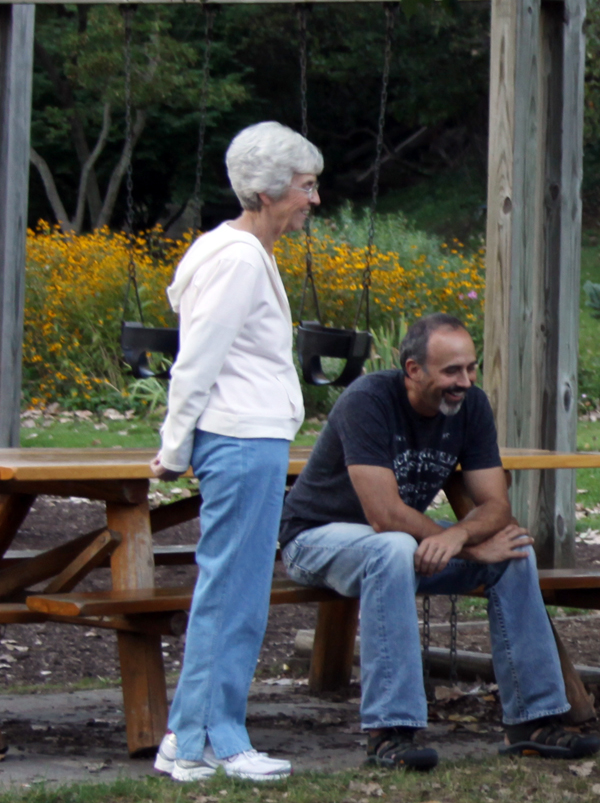